Lost beneath the ocean, Atlantis has become a myth. When it rises from the deep everything will change for Kyle, Finn and the merpeople.

Jake Seabrook, a human descendant of Medina, the Atlantean Goddess of Love, never asked for magical powers. Unfortunately, not only does he have them, but they are also growing stronger as more of the Atlantean gods wake from their long slumber.

When Jake develops the power to hear the thoughts of anyone thinking about love, lust or sex, it is strange and embarrassing, but also reveals cracks in his relationship with his mermen lovers, Kyle and Finn. If they are going to continue to live as a ménage, they will have to learn to be honest with each other.

With Jake’s powers out of control and their relationship on shaky ground, the last thing any of them need is a crisis in the sunken city.

The Atlantean gods want to regain the powers they lost when the Atlantean people were banished from the city, but the solution will leave the mer who live in the city no choice but to evacuate and search for a new home or risk exposing the existence of the mer to the whole world.

Kyle and Finn return to Atlantis to help with the evacuation and insure the safety of their families, but time is not on their side. When Atlantis rises, the consequences could tear apart their ménage forever.

Kyle’s hand on his thigh took him by surprise. His mermen lovers were very sexual beings, but they tended to avoid public displays of affection, particularly in front of Finn’s parents. Jake stilled as Kyle moved his hand higher on his leg, dangerously close to Jake’s groin.

At his other side, Finn moved his chair closer and leaned on Jake’s shoulder. To the others at the table, it might appear as though Finn were reading the menu. Jake could tell he was doing nothing of the sort. A few more inches and Finn would be crawling onto his lap.

Then, even more disturbing than having his two lovers getting veryup close and personal in public, Jake felt a foot rubbing his ankle.

The angle was wrong for it to be either of his lovers, which meant it must be someone else at the table. Directly opposite Jake, Alex smiled at him and winked.

“Fuck!” Alex swore and reached under the table to rub his ankle.

“It was an accident,” Jake replied easily.

Alex glared at him for a moment before his face transformed and he offered the table a bright smile. “I’m sure it must have been. Jake would never want to hurt me, would you, babe?”

Babe? What the hell had gotten into Alex tonight?

Finn growled beside him and shot his brother a venomous look. “Did you call my boyfriend babe?”

“A slip of the tongue,” Alex said.

“Alex, are you drunk?” Summer asked.

“I’ve not touched a drop.” Alex smiled at his new wife.

“Then stop winding up Jake and your brother.”

“What about me?” Kyle asked. “You think it isn’t annoying mewhen your husband calls my boyfriend babe?”

“Sorry, Kyle,” Summer offered. “You didn’t seem as angry about it as Finn.”

“Well, I am,” Kyle snapped. “Jake’s my boyfriend, too, even if you all seem to forget it half the fucking time.”

No one bothered to scold Kyle about his language.

“Okay, let’s calm down everyone,” Malcolm said. “We’re disturbing the other patrons, so let’s order our food and try to enjoy the evening.”

Jake nodded and searched for the waiter. Tim hovered right behind him, pad and pen in hand.

Since Tim seemed to expect it, Jake chose what he wanted first. Finally, everyone had placed their orders and Tim, somewhat reluctantly, went to put them in.

“Would you like anything else, darling?” Finn mumbled under his breath.

Jake wrapped his arm around Finn’s shoulder and gave him a quick hug. “There’s no need for jealousy, so stop worrying.”

Finn kissed him in response and Jake had to restrain himself from deepening the connection. He reminded himself they were in public and not everyone was comfortable with seeing two men kissing each other.

“I guess I’m not going to be getting a kiss while we’re here.”

Jake knew, without looking, that Kyle had not spoken the words he had heard.

“Finn’s the public boyfriend and I’m…the other one, I guess.”

Jake frowned as Kyle’s words sank in. Was that how Kyle saw himself? He thought back on the times he had been out in public with Kyle and Finn and he accepted that Kyle might have a point.

He wasn’t sure how or when it had happened, but somewhere along the way, Finn had become the more traditional boyfriend. When the three of them were out together, Finn’s hand was the one he held as they walked down the street. When he introduced his lovers to someone, he referred to Finn as his boyfriend but occasionally had stumbled a little with what to call Kyle. People simply didn’t expect there to be more than two people in a relationship.

Jake realized he had been so busy trying to reassure Finn that he wanted him and that he wasn’t simply a substitute for Alex, he had been neglecting Kyle.


L.M. Brown is an English writer of gay romances. She believes that there is nothing hotter or sweeter than two men in love with each other… unless it is three.

When L.M. Brown isn't bribing her fur babies for control of the laptop, she can usually be found with her nose in a book. 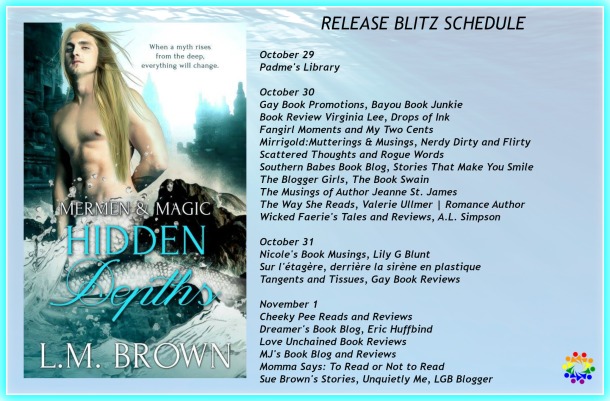 Thank you for sharing my new release on your blog today.