This is a role play by Quin&Perin. Please check the warning section inside the book. 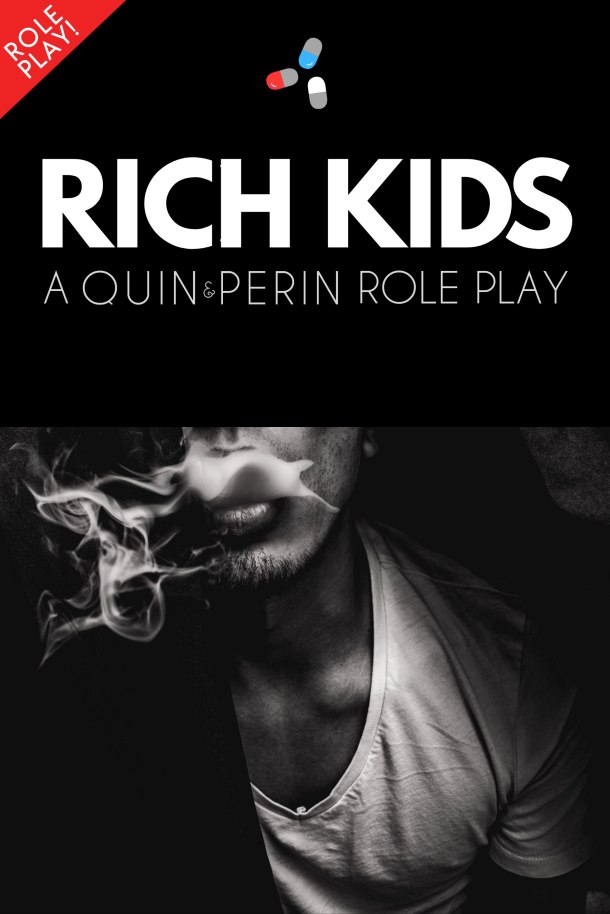 My name is Nathaniel Preston. Second son of the Preston estate.

I've been raised to be perfect, to be ahead of every game, not to do wrong. Sem, my crass and vain older half-brother, is the complete opposite of me. All he seeks is his next high. To get there, he cheats, blackmails, and seduces.

Which wouldn't be a problem, if one day he didn't decide to tape me in a very compromising position...

With a last drag on my cigarette, I pushed the door to the kitchen open. And once I did, silence broke. I could hear something. Sounds that sparked flames inside my gut, twitching to life. The kitchen’s old chimney was connected to the one on the upper level, the one in father’s bedroom.

I heard moans, grunts; I heard furniture move, scrape across the hardwood floor. Goosebumps spread across my skin, making me forget what I was here for. I put out my cigarette and tossed the rest of it into the sink. Someone was fucking in his house, in our father’s bedroom. I just had to find out who.

With a grin in place, I took off, back down the hallway, up the stairs. I used the railing to pull myself up faster. I felt like a child, so fucking excited that my mind raced to all kinds of options. Perhaps it was one of our maids or the gardener. But Jesus, in my father’s bed? That was quite bold. I loved it. So forbidden. So taboo. My favorite kind. I couldn’t stop grinning as I headed down the hallway to his bedroom. My heart thundered in my chest as my hand closed around the door handle. I counted to three, listening in on the lewd noises that were so much clearer now. So much louder. Unhinged. Like in a really dirty dream. Or a porno.

In one quick move, I yanked the tall door open, and my heart almost stopped. Jesus Fucking Christ. There were three men in the middle of the bed. Two blonds, lean, tanned, on either side of...Nate.

I needed Nate, and he needed me.

To breathe, to stay somewhat sane. Which was funny because before we began seeing each other, we’d both been running around like headless chickens. Or cocks? Roosters. Anyway. Now, almost two years later, we’d settled into a routine. Something I thought I would hate. Routine. But with him, it was never predictable. Never boring. Nate kept me on my toes. Ever the brat I left behind. And while he’d begged me not to go and called me crazy for telling him to fuck other guys, I knew better. Nate was a cockslut. My cockslut, but one nonetheless. He would venture out eventually, most likely when we were fighting, which happened rather frequently. Then he'd fuck around and crawl back on his hands and knees when he was done — begging for forgiveness.

It was how he worked. How he functioned.

He loved sex, but he craved the control he could gain from it.

To hurt me. To make me mad. To be the hunter, not the prey.

So, I figured, I’d best give him rules, make it less taboo, a game we both played, before he could act out and destroy both of us in the process. He was allowed to fuck anyone if (1) he told me about it, (2) live streamed or recorded it, and (3) played safe. No one was going bare with him. No one.

As a pair of genre rebels, Quin and Perin—from the US and Germany—are constantly maneuvering time zones and plot bunnies to whip up Gay Novels. Expect plenty of heat and elevated smut. With a dash of drama, a pinch of sweet, and a hefty amount of kink on the side, they serve up stories that will leave you full and satisfied.

Check out the other blog posts here

➜ Sign up to become a tour host here 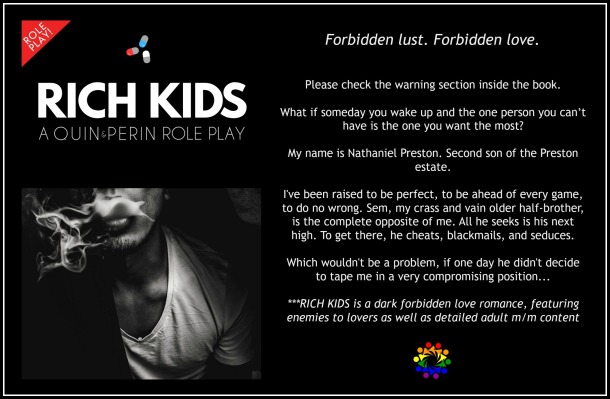 Posted by Gay Book Promotions at 21:30