The story can be read as a standalone. It is the first book in the Pelethus Series. The next book involves different main characters that are connected to those in Hathonatum.

Hathonatum is a love story that spans time, dimension, universe and death.

Have you ever wondered if that little voice inside you is actually your voice?

Egypt captivates Benjamin. As an adult, he immerses himself in his chosen profession, as an archaeologist in the ancient city of Abydos. For Ben, the hieroglyphs, and paintings unlock dreams of a time long lost.

The dig Ben works on is financed by Ashari Hathonatum. For many years, the man has been looking for the one who completes him. He initially saw his heart’s match from a distance. But that was a long time ago and from an alternate universe. When Ashari encounters Ben, he wonders if he is the reincarnation of the man he saw, through another’s eyes, all those years ago. Will the secrets Ashari hides about his heritage stop their love blooming, or will others from his dimension, determined to keep Ashari from his heart’s match, rule the day?

**The story is written with British spelling/grammar. ** 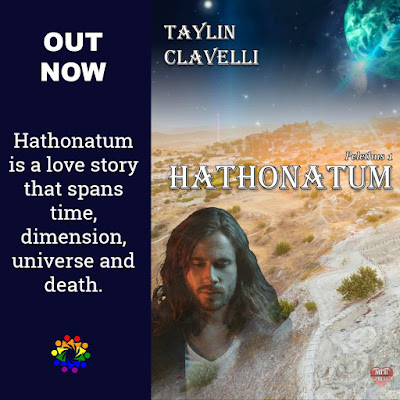 Though Ben loved the thought of studying Seti, he was part of a small crew concentrating on Narmer (3180-3120 BC), whose tomb was located to the west of the dig, almost as far away from Seti as a tomb could get. Not much was known about the first pharaoh of the combined kingdoms, and Ben wanted to help discover something new. He wanted to shed light on a life that no one knew about—a new phenomenon to capture the imagination.

Ben had been on-site for a little over a week when he saw an intriguing man talking to Terry, his dig leader. Judging by his skin, Ben suspected the man to be local, but it was difficult to tell. Other than his face, the only other exposed part of him was his hands. The rest of him was covered with clothing designed to keep out the worst of the sand—layered, lightweight, loose, and black.

When the man locked gazes with him, Ben found himself staring into a vibrant blue sea of lapis lazuli, framed with black lashes and dark eyebrows. It wasn’t until a fellow worker walked between them that the connection was broken. When Ben sought to re-establish contact, the other had his back to him. Ben returned to his work, clearing out a trench of sand. The heat and excitement over what his group might find overshadowed any musings concerning the stranger.

At the end of the day, Ben was so tired he clambered onto the city-bound truck with as much grace as a stumbling mummy.

That night, while lounging on his bed, images of dark blue assaulted him. The event was rare for him, considering Egypt was his prime…prime everything.

Every day, the journey to the ruins was like being transported back in time. Ben could close his eyes and almost feel like he was there, in ancient Egypt. Often, he imagined he could see a partial image of the hustle and bustle of the ancient civilization continuing around him. At other times, he was in the quiet solitude of a temple. The images were odd, considering ancient Abydos was a graveyard.

From the drop-off point the next day, Ben made his way to tombs B17 and B18—the tombs attributed to Narmer. He worked there all morning with his small, square trowel and brush, slowly moving away the sands of eons.

As lunchtime approached, he relocated to the edge of the main dig and took his break. From there, he would imagine life in ancient Egypt.

Daydreaming, he chose to walk back to his station.

Suddenly, an alarm sounded. It was the warning for a sandstorm. It was similar to what his grandparents had described as the air raid warning from the war.

There was a flurry of activity while people efficiently covered artefacts and other areas of importance. Ben glanced around, noticing the storm was a lot closer than he’d originally thought. It had come out of nowhere. What crept toward the dig seemed like a moving wall of cloud, dense enough to shield the view and engulf anything below it. If it wasn’t for the cottonlike plumes of wheat colours, Ben could have believed a curtain of rain was heading his way. The screen of rapid shadow was making quick progress toward the dig, swallowing all in its path. Briefly, Ben went rigid, unable to move. When the sound of hissing reached his consciousness, and sand stung his feet and face, he dashed toward shelter. He was running a losing race.

Abruptly, he was grabbed and pulled to the floor behind a shallow wall. In a spell of activity as sleek as the sandstorm, a mask was put over his face, and his body along with that of his saviour rolled together. Over and over, they turned. Coming to a halt, and dizzy, Ben found himself cocooned, head to toe in a thick blanket. From the outside, the two of them probably resembled a fat, discarded mummy.

As Ben regained his senses, he could feel a wall to his back and secure arms around him. The only thing between them was his messenger bag containing the bottles of water he was required to keep on him to prevent dehydration in the desert sun.

Panting, he opened his eyes to a familiar sea of lazuli.

1. Things I learned while writing Hathonatum.

a. Other than looking stunning, semi-precious stones have some impressive characteristics. E.g. Amber is good for warmth and wellbeing. Jasper’s, in general, have a grounding and stabilizing effect, connecting the wearer with the earth. Lapis lazuli is multi-talented. Among them, the stone can activate psychic abilities.

b. There are many levels of alternate dimensions. The first is where there is you, and me, doing exactly the same, in multiple dimensions. Further down is the dimension where you and I exist but are doing completely different activities. Then, much lower again is the area that Hathonatum is based on. This dimension is effectively a different universe with entirely different characters.

c. Birthmarks can be a sign that a person has been reincarnated. It is said that they are marks left over from that life.

d. Scene stealing characters can come out of nowhere. I always planned for Ben to have a family, but their personalities didn’t develop until it came time to use them. One turned out to have a more prominent role than expected.

a. Abydos is more than a place in a TV series. It exists and is used in Hathonatum.

b. Egyptian history has been a hobby of mine since childhood. But to ensure accuracy, I downloaded many maps of Egypt.

c. I have been to Egypt, visited the pyramids, the Cairo museum and taken a trip down the Nile. So, scenes written about these areas come from personal experience.

d. Initially, I intended for Hathonatum to be one-off. Indeed, it can be read as a standalone. However, Ben’s brother Jared turned out to be so popular with my pre-readers that they insisted he has an adventure of his own. Thus, the Pelethus series was born. I am in the process of writing book two, Conversion.

e. Because Ben was born in the UK, the novel is written with British spelling.

Considering the random information above, I believe it is accurate to say that the most challenging part about writing this story was getting it all in there in a believable manner. When getting started, I wrote several versions of the opening chapters. I was unsure of whether to begin with the sci-fi, historical or modern elements. There was also the option of writing aspects in parallel with each other, first or third person and tense to consider. Those first attempts didn’t feel right, so I started from scratch and put myself in Ben’s position. That’s when writing in the third person from the viewpoint of a modern-day Ben seemed most appropriate. Other views come into the story, but they sneak in gradually.

Looking back, being a planner might have helped. In Hathonatum, it is only the opening chapters that were planned. I’m more of a pantser writer. I have about four or five pivotal events that I develop the story around, but I don’t plan on where they’ll be or the connecting events. Anything else appears as the story is written. Using this method, I feel that my writing is more natural.

It is difficult though to turn the thought process off and while writing one chapter, I usually have an idea that may fit in somewhere else. I develop a list of one-liner ideas or lines of dialogue that I think are good. That doesn’t mean everything in the list is used. Sometimes I’ll have a better idea or find that there wasn’t an opportunity to use a concept. I don’t like to force a scene into chapter because, when I do that it always reads as though it’s not a natural fit. As a result, the only scenes that are edited out of the book are repeated ones – others are simply not included. I’d list what they were, but once I’ve discounted something, I delete it from my list and forget about it.

I am proud to be British and proud to be an author of gay romance stories from varying genres. I write under the pseudonym Taylin Clavelli, not because I don’t want my real name out there, but because I think my real name is unmemorable for an author. The name came about from a night of Skype and a lot of wine.

My first published work - a comedy called Boys Toys and Carpet Fitters - came out in 2012. It was part of a Dreamspinners anthology called Don't Do This At Home. Since then, I have produced a further two novels and five short stories, not including Hathonatum.

As well as being married for close to thirty years, and have a grown-up family, who I adore - I work part-time at a Manor Hotel, where I am also the resident historian. I am a book reviewer, too for a well-known site.

Not being a spring chicken anymore, I have a few hobbies that over the years have come, gone and resurfaced again. I am an experienced horse rider, and 2nd Degree Black Belt in Taekwondo. I help my husband with DIY projects, upcycle as much as possible and love my garden. As for those simple things that make me stop in my tracks. The dawn chorus, baking bread, lasagne, and the scene where Shadowfax makes his screen entrance.

Enter the Rafflecopter Giveaway for a chance to win:

A choice of paperback + swag from Dakota Skies, Secret Of The Manor or 5 shorts from Taylin - 3 winners

A choice of 1 ecopy from Dakota Skies, Secret Of The Manor or 5 shorts from Taylin - 5 winners 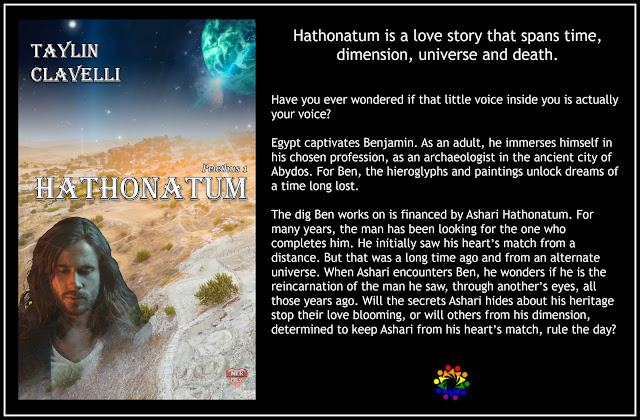 Follow the tour and check out the other blog posts and reviews here
Posted by Gay Book Promotions at 01:30