SERVICE WITH A SMILE

AVAILABLE NOW!
SERVICE WITH A SMILE
BY
LILY G. BLUNT 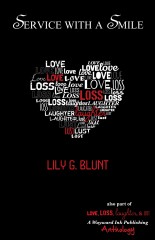 Terry visits a men’s designer boutique, and Ash gives him service with a smile…

TERRY caught sight of his reflection in the shop window and smoothed down his wind-blown hair. He glanced up and down, slowly checking over his appearance. A smile grazed his mouth. Pleased he’d chosen a tight-fitting white T-shirt to exhibit his firm torso, his dark eyes shifted to the clothing displayed on the other side of the glass. A pale blue shirt instantly caught his eye, as did a cream-colored shirt with a dusky paisley print. He knew both would suit his tanned complexion.

Terry could certainly do with a new shirt for the party later that evening, but that wasn’t the reason he was standing in front of the designer boutique. A flutter of excitement rippled through his belly and down to his groin, making his cock throb in anticipation. It wasn’t the clothing that had this effect upon him, but the thought of a particular sales assistant inside the shop.

It was late on Saturday afternoon, and the shop would be closing within the next half hour. He didn’t have much time to make his move. Terry hoped he’d timed his entrance just right. Peering beyond the male mannequins poised in the window, he searched out his intended target.

Terry noticed two men about to leave so he moved toward the door.  As it opened, an old-fashioned bell jangled overhead and the two men left the premises. They offered him a genuine smile. One of them winked at Terry, who returned the gesture. Terry watched them head down the street, walking hand in hand, for a few seconds before crossing over the threshold. A smile spread across his handsome face because he now knew only one member of staff remained to man the shop until it closed at half past five. The one guy he wanted the chance to be alone with. The one guy he lusted after. Ash.

Buy links:
AMAZON US / AMAZON UK / AMAZON AU / B&N / ARe / WIP
SERVICE WITH A SMILE
is also a part of the
LOVE, LOSS, LAUGHTER & LUST Anthology