The great war is over. The Dark Queen has fallen, slain by a dwarven champion as the prophecies foretold.

Still struggling with her transition from farmer's daughter to Hero of the Free Races, Irma barters her newfound fame for the power to change things for the betterment of all - including her former enemies.

With the Dark Queen's death, her subjugated orcs either succumbed to madness or were slain in battle. Only few orcs remain, and Irma has sworn to protect them, to help them find their place among the Free Races. One of them is Vash, a breeding mother from the pits, searching for a new home among the ruins of her old world with a tiny horde of orc children in tow.

When they meet, they discover that despite their differences in size, upbringing and race, they share the same hopes for the future. And while the odds they face seem overwhelming, the feelings growing between them may be strong enough to overcome them all.

From Rainbow-Award-winning authors Beryll and Osiris Brackhaus comes a sweet, happy f/f romantasy that begins where other epic fantasy novels end, a stand-alone novel about courage, hope, and the importance of family.

Vash sniffed the pale blue berry. It didn't smell of much, but that might have been due to the fact that her fingers smelled so much stronger, sour with sweat. Cautiously, she bit into it and nearly spit it out when its sharp taste exploded on her tongue, tangy enough to prick like needles. She had to force herself to keep her mouth closed and wait. It didn't burn, so that was good. Her only way of telling whether it was poisonous was to trust her instincts, and so far, they had proven surprisingly accurate.

Like those roots she had found her maggots chewing on once. She had told them to keep away, but ‘no’, they just had to. A few hours later, they had been whimpering about their belly aches. They had been lucky nothing worse had happened. They could have died. Or they could have been back in the pits, where they would have been thrashed – first for disobeying and then for whining.

With a shudder, Vash forced that thought away. They were all lucky to have gotten out.

She swallowed the bit of berry and waited for that queasy feeling she got whenever she tried something inedible. Surprisingly few things out here were. The orcs‘ fabled constitution apparently also applied to being able to eat almost anything. Until their escape from the pits, she had never eaten anything but the slop cooked in their huge, grimy kettles. All the food delivered to them from outside went into those pots and was cooked until it didn't taste of much at all. Even when their guardians had been set on slim rations, they had still received plenty. Vash were more important to the war effort than some stupid grunt that could easily be replaced. Vash were who made those replacements. They were the rarest kind of orc – those who could breed.

Her stomach grumbled angrily, but it was a pang of hunger, not nausea. Vash smiled. The berries were good and there were several bushes of them. A single one didn't bear many fruits, but all together, they would feed the maggots tonight. And, if she managed to reign them in, they might even have some for tomorrow. She popped the other half into her mouth, and this time, she welcomed the taste. She started picking the bushes clean, gathering the berries into the makeshift bundle she had made of a tattered cloak.

Her own clothes were a ragged mix, the simple, coarse shift she had been wearing in the pits and whatever she had picked up since – a pair of sturdy leather pants that were a little too short, and a thick, padded tunic which she wore over the shift. Her lower arms and her feet were wrapped in rags both for warmth and protection. She'd even found a pair of fitting boots on a corpse a few days ago. 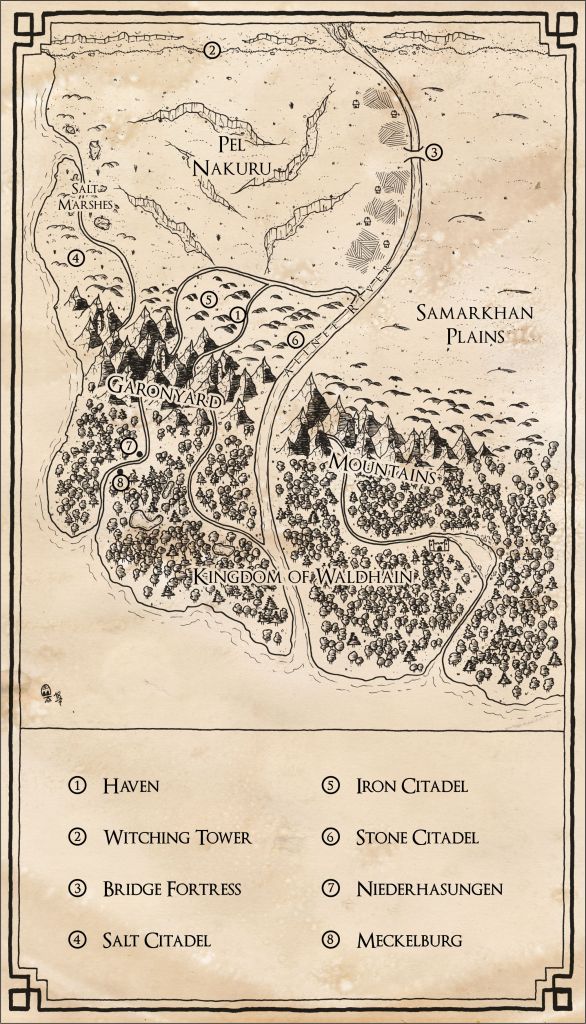 Beryll and Osiris Brackhaus are a couple currently living their happily ever after in the very heart of Germany, under the stern but loving surveillance of their cat.

Both of them are voracious but picky readers, they love telling stories and drinking tea, good food and the occasional violent movie. Together, they write novels of adventure and romance, hoping to share a little of their happiness with their readers.

An artist by heart, Beryll was writing stories even before she knew what letters were. As easily inspired as she is frustrated, her own work is never good enough (in her eyes). A perfectionist in the best and worst sense of the word at the same time and the driving creative force of the duo.

An entertainer and craftsman in his approach to writing, Osiris is the down-to-earth, practical part of our duo. Broadly interested in almost every subject and skill, with a sunny mood and caring personality, he strives to bring the human nature into focus of each of his stories.