Cover Reveal - In Case You Missed It by S. M. James 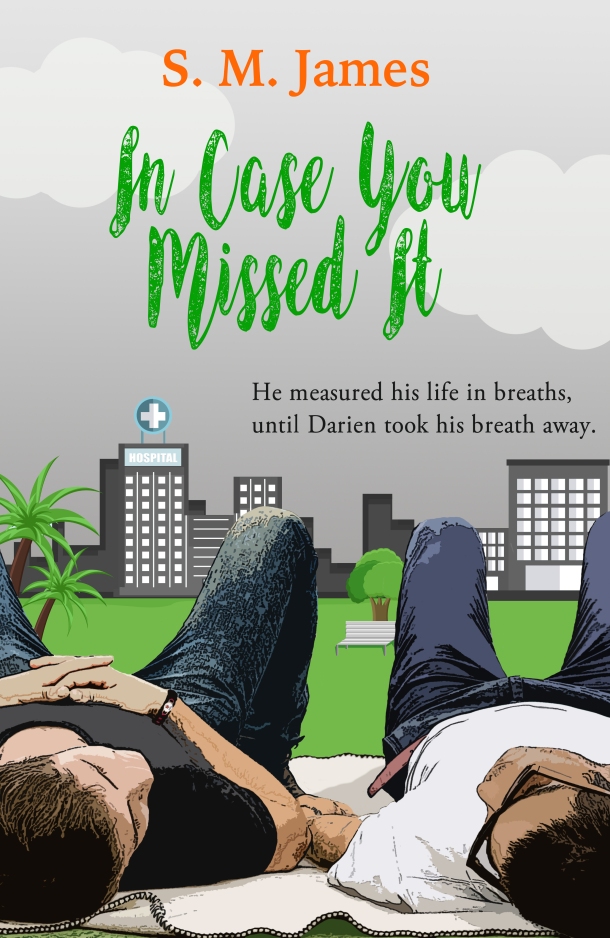 Book Title: In Case You Missed It

Brooks measured his life in breaths, until Darien took his breath away.

Brooks is convinced his life is totally, one hundred percent happy.

Until Darien tracks him down.

Darien was supposed to be the guy he kissed once and remembered forever, but now he’s back in Brooks’s life, with easy smiles and big ideas.

The first of which … show the homeschooled Brooks everything he’s missed out on. But as the pair work through a spring of playing catch up on life, it becomes obvious to Darien that Brooks has a secret.

And as things heat up between them, Brooks’s secret might just be Darien’s worst fear.

Because Darien has always lived in the moment.

But Brooks has always lived for the future he knows is inevitable.

When life is set to tear them apart, will love be enough to keep them together?

Darien turns toward us in the bleachers and throws up a little wave. From the corner of my eye, I notice Chelsea pointing at me, and Darien double takes. His expression is almost comical.

Darien tosses his lacrosse stick to the side and jogs over to where we’re sitting. His eyes and smile are so wide he looks deranged, but the happiness radiating from him bathes me in warmth.

When he doesn’t say anything, I step in to fill the awkwardness. “Careful. People might think you’re happy to see me.”

He huffs a laugh, slightly out of breath. “Damn, Brooks. You could have given me some warning.”

I stand up and make my way down the few rows until I’m on the one right above him. The others are watching us creepily and it’s weird to have an audience when he’s looking at me like that. I should keep my distance. I can’t. “Are you surprised?”

“Very. You realize this is something you’ve been missing right? Checking out hot guys at practice. We can theoretically check that off your list.”

I pretend to scan the rest of the team. “Mmm … jocks in their natural habitat. My favorite.”

He whacks me in the stomach. “Mean.”

“Yeah but you were supposed to say, ‘there’s just one guy I’m here for’.”

“I didn’t realize this thing was scripted,” I say, gripping the metal barrier and leaning down a little.

“Don’t be embarrassed. You’re clearly not as well versed in flirting as I am.”

“Finallyyour ego makes sense. Too much flirting, not enough criticism.”

He holds his arms out. “What’s there to critique?”

And with that view of his body—his lean legs and loose shorts and tight t-shirt—I have to agree. Damn … the list of reasons why I should give him up melts away. There’s no walking away from this pull between us.

“Mitreski!” his coach calls, snapping me from my thoughts.

Darien ignores him as he drops his arms and steps closer to me. He reaches up to wrap one of his hands over mine. “Wait for me after practice?”

My mind gets loud with warning. What if he’s sick?

What if I catch it again?

What if I end up in hospital this time?

What if … he’s perfect for me? Hope surges in my chest.

What if I tell him everything and he doesn’t walk away? What if I get better? It’s an impossible thought, but when I’m with Darien, he makes me want to entertain infinite impossibilities.

Darien’s hand tightens around mine. “I don’t want to let go,” he admits.

“There are some thoughts you’re meant to keep to yourself.” But as he goes to pull away, I catch his fingers between my own. Just for a second. Just long enough to show that while I’ll keep the thought to myself, I don’t want to let go either.

As soon as I release him, he jogs back to his team, and I walk back up the three rows to where the others are sitting.

Heat has surged to my face, my ears, my neck. I’m sure I must be embarrassingly red but no one says a thing about it.

Cameron smiles at me, blue eyes twinkling, and it hits me just how much I love my cousin. He’s always been there for me, looking out for me. He knew I needed this.

I nudge him as Darien and the team set up a practice game. “Thank you.”

Cameron shrugs. “I overhead you two today. It was sickening. Really sappy. I had to get you together again, because no one needs to hear that.”

If Cameron told me why he wanted me to pick him up, I probably wouldn’t have come. I would have used the excuse of Darien being sick, and stayed away, intimidated by the thought of showing up—especially with Chelsea here too.

But as I watch Darien run back and forth, with no clue what the rules are, I feel like I’m lit up from the inside. He scores at one point and I’m practically bursting with pride as we cheer and stomp our feet, making as much noise as possible.

Instead of getting embarrassed, he mock bows, loving the attention.

I lean over to Cameron. “I’m going to tell him.”

He jerks around to look at me, all humor gone. “For real? Brooks, are you sure?”

“I know.” I hesitate before letting out a sigh. “But it’s not up to me either. I really like him, but he has the right to know what he’s getting into, before anything happens.”

“No, you’re not. You need to stop seeing yourself as a burden. Fuck, Brooks. You’re always going on about wanting to be treated the same as anyone else, but you need to start treating yourself that way too.”

Cameron’s right. It pisses me off that he’s right so I’m definitely not going to agree, but I note his words. Let them sit, percolate. Soak them into my subconscious. “I have to tell him.” I push as much emphasis as I can into the words, trying to convince myself as much as him. “But I have no clue how.”

“Hey, don’t overthink it. The right moment will come up, and whatever happens from there, happens.”

I watch Darien, wishing the world could just slow and give me endless days of school, and watching practice, and making friends, as I plunge into a world of incomprehensible feelings.

But facing it is inevitable.

While not writing, S. M. is a readaholic and Netflix addict who regularly lives on a sustainable diet of chocolate and coffee.