When the lines blur

Surprise, it's a boy!

I never wanted to know him.

Never even suspected his existence. But once I knew, I had to see him. Had to see if it was true.

He has your eyes, your hair, your dimples.

Timothee is everything I used to be, full of life, full of joy. He's also a sassy little sh*t.

He has me wrapped around his fingers, so damn easily.

What we share is all kinds of wrong, even if it feels oh so right.

***LIKE FATHER, LIKE SON is a forbidden love romance, full of snark and k*nk. Please heed warning at the beginning of the book.

When he bent over the pool table, cue perched between his fingers, I positioned myself right next to Tim, my cue resting between my feet, tip pointing up. “You gotta go a little to the left,” I said and nudged him there. Tim shifted willingly, chest to the table, arms outstretched. “Aim for the ball in the middle, then touch it softly,” I added while I tried to keep my eyes from making a detour down his back to where his pants stretched tightly over his ass.

He made his move, which made the ball jump in the right direction but missed its aim completely. “You didn’t do it softly like I said.” Tim straightened up and smirked impishly.

“Next time I tell you to go softly, will you?” he asked.

I scoffed and, in a few, quick strides, rounded the table. Tim kept his smirk in place, gliding his hand up and down the cue so slowly it looked like he was stroking something else. God, this kid…

I bent over, hit the ball exactly how I’d showed him, and watched it pluck into the far right pocket. “That’s how it’s done,” I told him. Tim mimicked me childishly, waiting for me to continue. Someone approached him.

“Ohh, Dev, who’s this pretty little thing? Are you picking up whores from schools now?” Jason. I clenched my jaw as Tim whipped around and faced the man. Heavily tattooed, even more than me, blond hair pulled into a bun, and just as tall as Tim.

“Mind your fucking business,” I snapped while Jason studied my son’s face intently. Tim didn’t move. He just stood there staring at the man as Jason drew a thumb over his jaw. “Don’t touch him,” I snarled.

“Or what?” Jason lilted, his tone dripping with innocence. His father was Steven, the man who’d bailed me out of prison nearly two decades ago. Jason was younger than me, in his late twenties, and he had that bad boy charm that always had us on edge around each other. I hated him; he hated me. For various reasons. But for one in particular: his I-am-everything-and-you-are-nothing attitude.

“Or I’ll make you regret it,” I threatened, placing the cue on the table and stepping closer to them. Tim slowly emerged out of his trance, his eyes hooded when Jason flicked his thumb across his chin. Two men stood behind him, sipping beers, guns attached to their belts. The usual.

Jason dropped his hand, the chains around his wrist jingling, and hooked one finger in a belt loop of Tim’s jeans. “How much did you pay for him?”

I drew forward, grabbed Tim by his arm, and yanked him in my direction. “Don’t touch what isn’t yours,” I growled from between my teeth, fingers clenching around Tim’s biceps.

“Oh, so I was right?” Jason asked cheerfully. His lips curled into a smirk. The scar—from a fight I’d witnessed years ago—running from his right eye over his cheek turned his expression even more sinister, and it drove me crazy. It always did. I eased my hand off Tim’s arm and narrowed my eyes. “He looks delicious. Wanna play? Winner gets all.” That smirk broadened into a full-on grin. Jason was a good player, but this wasn’t like him. If he played, he played with guns, and death was on the table. Not some boy. Not my son.

“I wanna play.” A voice piped up from beside me, and I flicked my eyes in Tim's direction. His eyes were dark and determined. “Winner gets all.”

“Oh.” Jason grinned, turning to Tim. “Why don’t we save everyone a lot of time and you just come home with me right now, huh?”

Tim smiled—fucking smiled. “You win, I go home with you, no charge. We win, you’ll leave us the hell alone and get out of the bar.”

As a pair of genre rebels, Quin and Perin—from the US and Germany—are constantly maneuvering time zones and plot bunnies to whip up Gay Novels. Expect plenty of heat and elevated smut. With a dash of drama, a pinch of sweet, and a hefty amount of kink on the side, they serve up stories that will leave you full and satisfied.

Enter the Rafflecopter Giveaway for a chance to win one of five ecopies of Like Father, Like Son 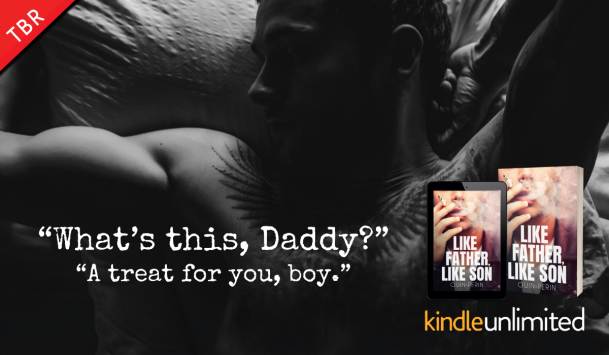 Follow the tour and check out the other blog posts here
Posted by Gay Book Promotions at 05:30