TELL US ABOUT YOU.

I live in sunny Northamptonshire in the UK with hubs and my two twenty-something “children”.  I taught in primary schools for over twenty-five years before discovering the wonderful world of m/m fiction.

WHEN DID YOU START WRITING?

Surprisingly, I discovered m/m novels through Twilight about four years ago.
As a teacher, I never set out to become an author. Although I often had story ideas whirling around my head, I never wrote them down. But after reading slash Twilight fanfiction for a few months, I suddenly had an idea in the middle of the night, and wrote my first two chapters the following day.  It was during my summer holiday and I remember thinking “Why am I wasting my time on this?” I posted on FanFiction.net and added some more chapters over the following months, which were het. I have since rewritten this story, deleting the het scenes. The story is now called Heartbeat and it’s still on my FF profile (sue273).  I started Oxford Blues during a bout of insomnia. This story rapidly gained followers and introduced me to many friends in the Twilight fandom. Other stories followed, along with a wider readership and, after joining Facebook, I met up with many people who encouraged and helped me along the way.

I edited some of my stories, and then sent them to a couple of publishers, but they weren’t interested in writing that had been previously offered as fanfiction. I have to thank Tee Baggins because she suggested self-publishing, helped guide me to all the right places, and held my hand as I published my first book. I decided to publish my own fiction myself, as it’s so much quicker than waiting on a publisher.

BEST ADVICE YOU’VE EVER BEEN TOLD?

Life is too short to stuff a mushroom.
Seriously, your best form of advertising is your next novel. So keep writing …

Not necessarily crazy, but this altered the course of my life. I ruptured my Achilles tendon while barn dancing. I didn’t do it on purpose!  In fact, I almost didn’t go to the party that evening because I was feeling ill, but it was a friend’s fiftieth birthday and I thought I couldn’t let her down. As a result, I spent the next three months at home in plaster and a wheelchair. It was during this time I discovered Twilight, YouTube and fanfiction. I wouldn’t be here now if it wasn’t for that evening! Now that is crazy!


THREE RANDOM FACTS ABOUT YOU THAT YOUR READERS DON’T KNOW?


I have a Shetland sheepdog called Barney.
For as long as I can remember I’ve wanted to perform a gymnastic routine on a beam.

WHAT’S NEXT FOR LILY G BLUNT?

I plan to complete my three fanfiction works in progress that I put on hold while writing my latest novel. I’m also writing a story using Van Gogh’s paintings and Don Maclean’s Vincent as my inspiration.


TELL US ABOUT YOUR LATEST RELEASE. 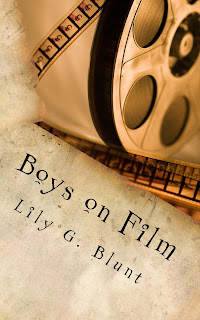