Book Title: Made In Manhattan

Lisbon and Manhattan are only a heartbeat apart

Will they get a second chance to rekindle their love?

Isaac was kicked out by his family at a young age.

It took him years of hard work to become his own man. Now he's helping the LGBTQ youth of Lisbon so they don't have to go through the same.

Max has a long and troubled past.

An ER nurse in New York City who volunteers at the local Liberty center, he knows first hand what it's like to lose your family and having to make it on your own.

A chance encounter between the two a year ago has them hoping for a happy ever after, if not for the distance between them, but when Isaac takes a temporary work placement in Manhattan, the two men have an opportunity to find what their love is made of.

Will they make it, or will life's tests tear them apart for good?

Made In Manhattan is the fourth instalment in the Made In series by Ana Newfolk. It is a standalone gay romance novel with a HEA ending and no cliffhanger. Fair warning, there will be naked man-parts touching, a touch of angst, and the claws of an overprotective cat.

Made in Manhattan is 62k words and features the same main characters from Made In New York - A Christmas Short Story.

You don’t have to read it, but you may want to find out how Max and Isaac first met.

Isaac pushed me away, his eyes tight and piercing.

“Isaac.” I put my hands on either side of his face so he would have no choice but to hear me out. “Can we talk, please?”

Fate really was a bitch.

I didn’t dare break eye contact for fear this was all a dream.

The club was packed so when someone elbowed me as they were trying to get past the motion jolted me into action, and with one step forward I wrapped Isaac in my arms, my face burrowing in the space between his neck and shoulder, his mass of dark curls soft against my skin.

He froze for a moment but then his arms came around me. As his body relaxed into the embrace, I swear a sob came from his chest.

He smelled of fresh pine; manly, woody, and so familiar it was making me dizzy.

I wanted to stay with Isaac like this for as long as I possibly could, which turned out to be not long at all because I had to ruin the moment with those five words.

He let out a long breath as if he was reminding himself we were in a club surrounded by people, and sat down at the table. I wanted to sit next to him, but it would be easier to keep eye contact if we were facing each other.

It had taken two days last Christmas for Isaac to do what many had tried and failed. He’d unpeeled the many layers of protection I’d built around my heart before hopping on a plane to return to his home in Portugal.

Six months later and three thousand miles away from my home in New York, I found myself right back where I’d been on the night I’d saved him from a fire, feeling like I’d been punched in the gut.

The first time I’d looked into his eyes, after I’d saved him from the fire, he’d been barely conscious, sitting against me on the pavement outside the LGBT Youth Center. All I’d seen was his wild curly hair, but when I’d pushed it away from his face and seen him open his eyes, he’d literally taken my breath away.

The second time I’d had the chance to look into his eyes from a close distance I’d seen it all, and it had been just before he’d pulled me into a kiss on top of the Empire State Building. 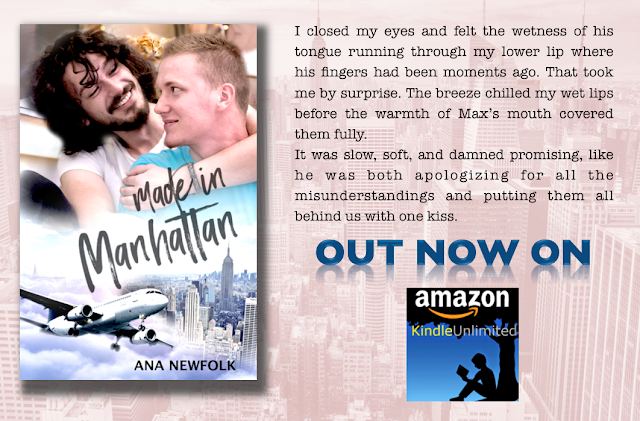 Ana Newfolk was born in Portugal where she grew up surrounded by sunshine and countryside. She has always had a deep love of reading, and ever since she can remember her favorite presents and treats have always been books. She would often be found in her not-so-secret spot reading her favorite adventure books (when she was younger) and romance novels (when she discovered boys). At 20 years old she moved to the UK where she has lived since.

In 2015 Ana stumbled across her first MM romance novel by chance, and she was hooked. She loves reading about men falling in love, hard, fast and ever so sweetly. This new found love for LGBTQ+ romance has opened a new world for Ana, and in 2017 she decided to finally listen to the voices in her head and write them down.

In addition to the time she spends reading and writing Ana has a full-time job that involves meeting lots of people with interesting stories to tell. She also loves baking as much as she loves watching people eat what she creates, much to the delight of family, friends and work colleagues alike.

Enter the Rafflecopter giveaway for a chance to win A paperback of Made In Portugal, plus some swag.

➜Sign up to become a tour host here
Posted by Gay Book Promotions at 02:00