New Release - Served with a Twist by Jet Lupin

Book Title: Served with a Twist

The pretty ones were always trouble...

Cut Jones knows Samson from his work, but not really. He knows he’s got money, that he likes his whiskey sours extra sweet, but that’s where his knowledge ends. Samson’s come into the bar every few days for a year but has hardly said more than five words at a time, but Cut didn’t mind. Samson was out of his league. So imagine his surprise when Samson asks for his help with a very personal issue.

The pressures of owning his own company and the expectations of his father had Samson Ba walking a razor’s edge. It was only a matter of time before he tried to find a release, but when he does it’s in the worst way. And he’s found by the last person he wanted to see him this way. But things aren’t all bad. Cut offers to help him relieve his stress, and Samson’s sure he’s just being nice, but some opportunities are too good to pass up.

Samson shifted his gaze to Cut, scanning him from boots to the dark blue locs on the crown of his head. Cut shifted, smoothing out invisible creases in his jeans before Samson said, “You look good to me.”

He seemed so sure; Cut felt he had to trust him on this. At least, if he was wrong, they’d get thrown out together. Nothing took the sting out of embarrassment quite like sharing it.

Samson stood aside and Cut preceded him into the restaurant, but then he scampered on ahead to talk to the host, making the whole exercise useless. They whispered among themselves, giving Cut ample time to verify that his ass was just as amazing in jeans as dress pants, before the host escorted them to a secluded corner meant for a party of six or more. The other patrons had enough class to pretend that their meals and conversations were more engrossing than the out of place strangers getting a whole section to themselves.

His anxiety subsiding as they took their seats allowed Cut to take things in properly. He saw the wire brush marks on the metal of the sconces that illuminated the room. When he flicked his gaze up, he saw the hand turned wires on the ornaments hanging from the chandeliers. On the glasses, the stems were so delicate and thin, yet when he picked up his to test that theory, it didn’t feel fragile in the hand. Everything was so refined and well-made in a way that made him feel small and cheap. But he’d push through it for now.

Cut claimed the bench against the wall, preferring to see anything coming his way, while Samson took the chair across from him, his back to the rest of the dining room. He shrugged out of his jacket and set it beside him. Cut took Samson’s when he divested himself of it and did the same. Samson picked up the thin tablet that served as the menu and swiped through it. Cut gave an appreciative glance to those wide shoulders and the bit of collarbone peeking out from the open neck of Samson’s shirt before turning his gaze down to his own menu.

“I recommend anything but the fish. Issues with the suppliers. The beef is very good, though.”

“You really know your stuff.” Of course someone like Samson came here regularly. A high class spot for a high class guy. Cut carefully sipped water from an elegant crystal glass.

Samson put down the tablet, grinned. “I should. I own the place.”

Water dribble down Cut’s chin when he nearly choked on it. He quickly mopped it up with his sleeve. It was better his stubble got a little wet than spraying Samson’s face.

“You own this whole place? By yourself?”

“I hope you don’t mind me showing off a little. Everything you get will be gratis, of course. So go nuts. I needed you to know that I really can pay whatever you ask. I’m serious about this.”

Cut moved to the edge of his seat. Just because no one was blatantly watching didn’t mean they weren’t listening. “Explain what you mean by this? I have an idea, but we’ve got to be on the same page.”

“O-of course.” Samson wet his own lips with a little water.

He seemed a little flustered. That was the last thing Cut wanted.

“Why don’t you start from the beginning?”

“It’s a bit much to say over the table.” But it had to be said. If they didn’t have honest, open communication from the beginning, there was no point in starting at all.

But if Samson had concerns about being overheard, Cut had a simple solution. He scooted over on the bench. “Join me. There’s plenty of room on this side.”

Samson froze and swallowed so hard Cut swore he heard it. He thought that might have been a step too far, but Samson came around to his side of the table, and they sat hip-to-hip. The cushion was wide enough to accommodate both of them with room to spare. A server rushed over and repositioned Samson’s place setting before disappearing as quickly as they came.

There was that scent again, sweet and thickened by Samson’s natural aroma. Cut was suddenly aroused and uncomfortable. He shifted to adjust his cock into a more comfortable position, and his thigh brushed against Samson’s. The bigger man snapped his leg away for an instant before he relaxed again. Somehow, knowing he was nervous too helped Cut relax. Maybe too much.

He rested a hand on Samson’s knee and squeezed. When he realized what he’d done, Cut pulled away and set both his hands on the table.

“So,” he coughed. “Let’s start with the alley and why you were there.” 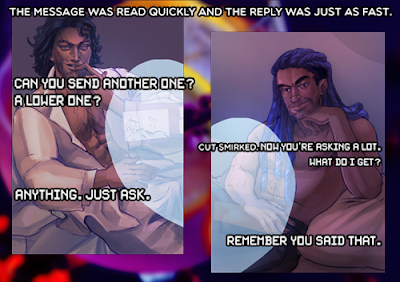 Stories longing to have words put to them were in Jet’s heart from an early age. Jet enjoys exploring the connections and similarities between people whether they be shifters, vampires, or aliens, rendering the unknowable very knowable indeed.

Jet’s days are spent toiling away at a keyboard, slumped over a pen and paper hunting for those words, or playing around on twitter with a partner, and two rambunctious cats for company in the temperamental North Eastern US.

Follow the tour and check out the other blog posts here

Posted by Gay Book Promotions at 02:00