Blog Tour - Kings of the Mountain by Morgan Brice #giveaway

Book Title: Kings of the Mountain

Themes: coming of age, forgiveness for self and others,

It’s the first in a new series

Dawson King’s family has been hunting things that go bump in the night in Transylvania County, North Carolina, since before the Revolutionary War.

Dawson was never happier than when he was racing his souped-up Mustang along winding mountain roads and hunting monsters with his best friend, Grady. Then Grady fell in love with him, which should have been perfect since Dawson had already fallen hard for Grady.

But Grady was only seventeen, and Dawson feared that sooner or later, Grady would realize his feelings were just a first crush, and then he’d be gone, leaving Dawson devastated. They both needed space to figure things out. So Dawson joined the army, while Grady stayed on the mountain.

Four years later, Dawson is coming home. He’s more sure than ever Grady is his forever love, and they’ve both agreed to begin this new aspect of their relationship as soon as Dawson gets back.

Then Grady’s father is killed in a werewolf hunt gone wrong. Grady is devastated, and he’s throwing mixed signals about moving forward. Dawson knows he needs to hold off on this new thing between them until Grady has time to grieve. But monsters never sleep, and one hunt after another throws Dawson and Grady into constant danger, while tension and unresolved feelings ripple between them.

Making it even harder, Dawson’s got a secret. He’s dreamed of death omens—which point to something stalking Grady. Can Dawson figure out who’s trying to kill Grady, save his life, and win back his heart?

Plenty of mutual pining, hurt/comfort, spooky chills, sexy thrills, and a very happy ending. The Kings of the Mountain is the first novel in the series. It is a MM romance intended for readers 18 years of age and older.

Excerpt
“Dude, you can’t keep me hanging for over an hour until we get home. Please.” Dawson didn’t care about begging. He needed to know what had happened, so he could figure out what to do when he got there.

Colt slid him a sidelong glance and relented. “If I tell you, you’ve got to keep Uncle Denny from whupping my ass, because he told me not to.”

Colt tightened his grip on the wheel, his knuckles bone-white and kept his eyes on the road, a convenient way to avoid looking at Dawson. “We’ve had some problems with rogue werewolves and feral shifters lately. They like our neck of the woods because it’s remote. If they didn’t bother anyone, we might have let it ride. But there’ve been livestock kills and some attacks on people that just barely got pushed back.”

“How did you know you’ve got weres and shifters?” Dawson fell back into hunting mode out of old habit.

“It’s that time of the month,” Colt replied with a smirk. “Seriously? The weres are only out the three days of the full moon. You know this shit—did you forget it all while you were gone?”

“Wouldn’t be the first time you made an ‘ass’ out of ‘u’ and ‘me.’” Colt’s smile faded. “Anyhow, we’ve all been out trying to track down one particular werewolf. He didn’t stay in the forest and feed off the deer. If he had, no one would have bothered him. Kept coming near towns, snatching farm animals. Grady and Aaron thought they’d figured out a pattern and guessed where he’d strike next. So they did a stakeout.”

Dawson found he was holding his breath. He had an awful feeling about how this was going to go.

“They were right,” Colt continued, his voice flat. “The werewolf got the drop on Aaron. Grady shot the wolf—silver to the heart—but he’d already bit Aaron.”

“He knew how it had to end,” Dawson said quietly, his voice thick with sorrow for both Grady and Aaron.

Colt shrugged. “Maybe he needed more than a few seconds to be okay with killing his father.” At Dawson’s wince, Colt relented. “Sorry. I don’t know what happened to Aaron’s gun; he probably lost it when he got jumped. Anyhow, Aaron went for Grady’s gun, and in the struggle, it went off. Killed Aaron. Grady walked home, covered in blood, and told Uncle Denny what happened. Denny took care of the body.”

“Jesus,” Dawson murmured. “What did they tell the cops?”

“Sheriff Rollins knew about the rogue were. He had his men out looking for it, too. So what went down could have happened to anyone.”

At least no one was going to jail. That was a small comfort. “What about Knox?”

Morgan Brice is the romance pen name of bestselling author Gail Z. Martin. Morgan writes urban fantasy male/male paranormal romance, with plenty of action, adventure and supernatural thrills to go with the happily ever after. Gail writes epic fantasy and urban fantasy, and together with co-author hubby Larry N. Martin, steampunk and comedic horror, all of which have less romance, more explosions. Characters from her Gail books make frequent appearances in secondary roles in her Morgan books, and vice versa.

Series include Witchbane, Badlands, Treasure Trail, Kings of the Mountain and Fox Hollow. Watch for more in these series, plus new series coming soon!

Sign up for my newsletter and never miss a new release

one of three ebooks from Morgan's backlist. 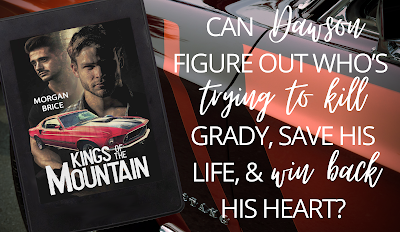 Thanks to KR Phoenix for this image

Follow the tour and check out the other blog posts and reviews here
Posted by Gay Book Promotions at 03:30