Beyond the Realm: Remember is a multi-author series.
Each book is set in its own world and can be read as a standalone novel.
Join eight authors on eight very different, romantic, and magical stories as each one writes their own take on the same concept.
“There’s no time. Remember…”

There are eight separate release dates.
All the books are available for pre-order and available on Kindle Unlimited.

Blurb
“There’s no time. Remember Rueberry Orchard.”
A beautiful man in strange clothing starts invading my dreams, and even though I know he isn’t real, the dreams—mind-links, according to him—are so vivid it’s hard to imagine this man doesn’t exist. After a few of these nightly visits, I start looking forward to meeting him and listening to his smooth voice as he tries to convince me to go to Rueberry Orchard.
To my surprise, the place really exists, but I know it would be crazy to go there when it’s ten hours away… right?
When the visits don’t stop, some deep desire inside me knows I have to listen to this dream man, even if it’s absolutely insane. I follow his instructions to Rueberry Orchard, and nothing in this world could’ve prepared me for what I find. Or for the wild adventure I’m about to embark on.
Book 2: Willowhope Manor by Sammi Cee - October 8th
Buy link

Blurb
“There’s no time. Remember Willowhope Manor.”
All Chance wants is a change of pace and a little excitement, so opening a B&B in a town surrounded by ghost stories sounds like the perfect solution.
Throw in Jett, the super-sexy handyman, who is as willing to work him over as he is to help return the manor to its former glory, and Chance knows he made the right decision.
On the surface, the renovation is moving along perfectly. Then Chance asks questions that were better left buried, and the manor is quickly overrun with restless spirits.
Will Chance have to sacrifice his dreams, tuck tail, and run, or will Jett stand by his side to face-off with the ghosts of Willowhope Manor?
Book 3: Copper Creek by Jacki James - October 13th
Buy link

Blurb
“There’s no time. Remember Copper Creek.”
From the moment Dimas met Hazzard they had a bizarre connections, it was like a mating bond but not quite. Something was missing. Imagine their surprise when that something turns out to be a someone.
An owl, a wolf, and a bear. All three mates and all three fit together perfectly. Now if everything else in Copper Creek were going as smoothly as their mating.
Unfortunately, an anti-shifter group is getting close to finding the psychotropic salamanders whose toxin can prevent a shifter's animal from surfacing. Join these three as they work with the rest of the Copper Creek clan to find the salamanders and make sure they don't fall into the wrong hands.
Book 4: Marcellus by Michelle Frost - October 15th
Buy link

Blurb
“There’s no time. Remember Marcellus.”
Since the Null’s defeat, the land of Ferron had known peace under the guiding hands of the Conservatory of Mages.
After he earned his name in battle, Vian the Scarred set out on every mission the Conservatory put before him. Yet, no amount of hunting monsters or fugitive Nulls could quiet the fitful yearning of his heart.
Until Marcellus came and imbued Vian’s life with his golden glow...for a time.
Set on the path of an unknown monster, Vian hunts with a ferocity that feels misplaced while vivid flashes of golden hair catch at the edges of his dreams. Fulfilling the Conservatory’s orders has always been his life’s work, but this time the demands of his heart might win out if only he could remember.
Book 5: Amos Ridge by BL Maxwell - October 20th
Buy link

Blurb
“There’s no time. Remember, I love you.”
It all started with a discovery. A cave beneath a waterfall that held a crystal. Two boys—best friends—embark on a journey they’re told will help all mankind. As the years go by, their friendship turns to love, and their adventure turns into a battle.
Drew Langly is the keeper of the crystal. With his contact, the crystal allows them to jump to different timestreams and help, if they can, to further that society or fix anything that improves their lives. When he’s ripped from the timestream, it’s the beginning of what will change everything they’ve come to know about how the different timestreams function.
Colby Adams is Drew’s boyfriend, fellow traveler, and jump partner. When Drew is left vulnerable after a failed jump, he’s there to help and try to figure out what went wrong. They soon discover another team of travelers is in trouble, but they’ve been warned against trusting them. The more they learn, the more they realize everything has been a lie. To rewrite a history that’s been full of deceit, they’ll need to put their trust, once again, in strangers. Can they rewind it all and begin again? Experience the history they were always meant to? With some unconventional help, maybe…
Book 6: The Manuscript by J.D. Light - October 22nd
Buy link

Blurb
“There's no time. Remember the Manuscript.”
Omi has had vague but vivid dreams his whole life but would forget them within minutes of opening his eyes. When he started writing the dreams down as soon as he woke up, he suddenly realized the significance when things in those dreams would pop up in his daily life. A broken toaster that caused a ridiculous automobile accident that was thankfully not fatal to anyone. A pop can that exploded in the middle of class and covered his least favorite teacher in orange soda.
Omi's dreams about a man with sunflower eyes were his favorite and enough to fill the pages of a manuscript. He couldn't help but fall madly in love with the man, even if he never had a name. But the beautiful stranger never appeared like the other objects in his dreams and with every day that he didn't, Omi became more and more depressed until he finally had to lock the manuscript away and stop writing about the man.
Six years have passed since Omi has touched the manuscript, but he would recognize the man that shows up at his favorite coffee shop anywhere, even before he gets close enough for Omi to see his sunflower eyes. How is a guy supposed to react to seeing the man he's been in love with from the time he was eighteen in real life for the first time? Probably NOT how Omi does.
Canton knows that Omi is his oracle the moment he sees him… just like he knows that Omi is his mate from the very beginning. But that is impossible, since fate weavers haven't had mates in centuries, and it is absolutely forbidden to mate your oracle.
Canton has waited for his oracle for two hundred long years, and he desperately wants to finish his work, but the more time he spends with the feisty man, the harder it is to remember to keep his distance emotionally. How can he possibly spend endless hours with a man he wants so much and not get to treasure him like he wants?
The answers to that just might be found in the pages of a manuscript Omi isn't sure he wants to share.
Book 7: Amethyst Isle by Wren Kenzie - October 27th
Buy link

Blurb
“There’s no time. Remember Amethyst Isle.”
Never trust a stray cat that follows you around and stares at you like it knows your darkest secrets. Especially, when that cat shows up perched on the shoulder of a huge man who demands I meet him on an abandoned pier at midnight if I don’t want to die. A man who also exposes those dark secrets right there on the street in front of my office.
My parents warned me to fear anyone who knew what I was. I should run away, but I can’t make myself do it. I’m drawn to him, and I need answers. I have to know how he knows. And just maybe he can explain the nightmares that have been ruining my nights. Explain why I feel like I’ve known him my entire life. But you know what they say about curiosity killing the cat, except this time, it’s the cat himself that might kill me.
Book 8: Imaginary Lover by Morgan Brice - October 29th
Buy link

Blurb
“There’s no time. Remember your imaginary lover....”
Cory Caldwell woke up by the side of the road with no memory of how he got there. He pieces together who he is but has no idea what happened to him.
Dark visions haunt him—flashes of blood, magic, and a brutal fight. Scorching dreams of a faceless lover offer no clues. His gut warns that something urgent is eluding him, and that time is running out. Worse is the sense of bone-deep grief, as if Cory is missing part of his soul.
Desperate for answers, he hops a bus for Fox Hollow, a town famous for psychics, mediums, and those with supernatural abilities. Then a stranger calls Cory by name and casts a furtive glance around him. “There’s no time,” the man says. “I need your help. Remember...” Can Cory unlock his missing memories and rescue the stranger before it’s too late?
Imaginary Lover is full of dangerous magic, hurt/comfort, brave monster hunters, dark curses, sincere psychics, found family, and forever love. 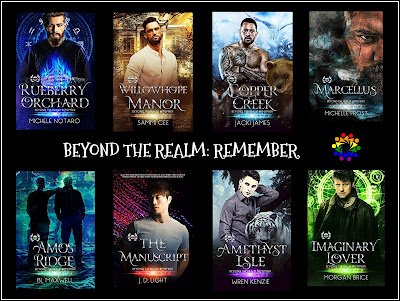 Posted by Gay Book Promotions at 05:30