Lust fuelled attraction is easy to ignore.
An emotional connection is harder to deny.

Jackson Young has gone into hiding. Fighting to get his name cleared and his truth heard, he’s followed Fletcher Doherty to Ireland for a safe haven from those who want to silence his story.

As they work on Jackson's biography, their growing attraction gets harder resist. Fletcher's made it clear though—their professional boundary isn't to be crossed, especially with so many loose threads from each of their pasts left hanging.

But as he learns more about the once coveted celebrity's rise to fame, and the manipulation and control that came with it, Fletcher finds it increasingly difficult to distance himself from their intimate moments. Lust fuelled attraction is easy to ignore, but an emotional connection is harder to deny.

Surrounded by Fletcher's meddling family, and ex boyfriends who still harbour feelings of being jilted, Jackson has to play the part of his lifetime. Can he prove that he does have talent and win Fletcher's heart as well as his trust?

And can he do it all before their idyllic hideaway is compromised?

Hide to Seek is the second book in the London Lies trilogy and is a slow burn, hurt/comfort, romantic suspense series.

Jackson joined him at the edge of the boat as the land disappeared into the murky water that sloshed up against the stern. He didn’t say anything. Neither did Fletcher. Their silence wasn’t awkward. It wasn’t comfortable either. It was a shared moment of reflection. Of knowing this could be the only peace they might have in a long while. A three-hour ferry ride from Holyhead to Dublin on international waters meant they couldn’t be found yet. They’d managed to get through ID control without any real problems. For how many times Fletcher had done this journey, he knew the ferry border control wasn’t as meticulous in checking details as the airlines would be. It was why across water was the only way. And they needed to breathe in this sanctuary while they still could. Fletcher wasn’t sure what awaited them in Ireland. He had apprehensions about going home, about bringing Jackson Young and all that came with him, to his family. But where else could they go?

So they shared a silent agreement to just stand, stare and be.

Until Jackson broke it with an intrepid inhale and a twist of his body to face him. “We should talk,” he said through the gust of howling wind.

“Should we?” Fletcher kept his gaze forward. Or backward as it were.

“This thing.” Jackson flapped a hand between them, his fingertips brushing Fletcher’s arm. “Us. We should probably acknowledge it.”

Fletcher breathed in, his chest rising, and slapped the railing to stand straighter. He closed his eyes, then opened them but kept his gaze on the distant horizon and not on the man beside him who was conjuring up feelings he didn’t want to concede to. Not then. Not when there was so much else left to learn between them.

“I know what you’re thinking.” Jackson slid his hand onto Fletcher’s cheek, demanding he look at him. A hand that stayed there a moment too long, with blue eyes delving into his soul and a soft thumb brushing along his yearning lips.

Jackson removed his hand and Fletcher’s cheek tinged with the heat left behind, but the flecks of ice cold seawater carried up by fierce winds slapped his skin and soon wiped the warmth away.

“You think this is too complicated to deal with now. That we need to focus on the book. On ourselves. On hiding. That’s why you left me down there, isn’t it? You can’t face me.”

“What did you think? This would be a romantic mini break?”

“I think we need to acknowledge there’s something going on. We can’t ignore it. I spent my life ignoring what was in front of me and look what happened.” Jackson threw his hands in the air, indicating their current situation.

“I’m not ignoring you, Jax. There’s no time for us. You want this truth out, then we’re gonna have to prioritise.”

Jackson hung his head, the disappointment and hurt seeping off his deflating body. But Fletcher couldn’t do this. He couldn’t rebound so quickly again. Time after time he’d done that, and each time had hurt worse than before to the point he couldn’t trust his feelings anymore. Nor could he trust that Jackson wasn’t clinging onto anything that would save him. How could this be real? How could either of them think that this could be something?

“I can be friends.” Fletcher made a concerted effort to keep his voice low, neutral, soothing. “Neither of us are ready for romance.”

Jackson breathed through a smile. “Are you an old romantic, Mr Doherty?”

“Aye. I am.” Fletcher wrapped his jacket around him, arms folding. It was to stave off the blustering wind chill but also, maybe, to act as the physical barrier to coincide with the one he built up with every wretched word he spoke. “I don’t jump into bed at the first sign of attraction. So when I said, let’s see what happens, I meant it.” He sniffed as the ferry dipped and swayed, aiming for the open arms of Dublin port. “But first things first, we have to get you off this ferry as Cameron Dale.”


About the Author
Brought up in a relatively small town in Hertfordshire, C F White managed to do what most other residents try to do and fail—leave.
Studying at a West London university, she realised there was a whole city out there waiting to be discovered, so, much like Dick Whittington before her, she never made it back home and still endlessly search for the streets paved with gold, slowly coming to the realisation they’re mostly paved with chewing gum. And the odd bit of graffiti. And those little circles of yellow spray paint where the council point out the pot holes to someone who is supposedly meant to fix them instead of staring at them vacantly whilst holding a polystyrene cup of watered-down coffee.
She eventually moved West to East along that vast District Line and settled for pie and mash, cockles and winkles and a bit of Knees Up Mother Brown to live in the East End of London; securing a job and creating a life, a home and a family.
After her second son was born with a rare disability, C F White’s life changed and brought pen back to paper having written stories as a child but never the confidence to show them to the world. Now, having embarked on this writing journey, she can’t stop. So strap in, it’s going to be a bumpy ride.
Follow C F White
Twitter @CFWhiteUK | Facebook | Blog
Instagram | Newsletter Sign-up
Giveaway
Enter the Rafflecopter Giveaway for a chance to win
an ebook box set of The District Line trilogy
a Rafflecopter giveaway 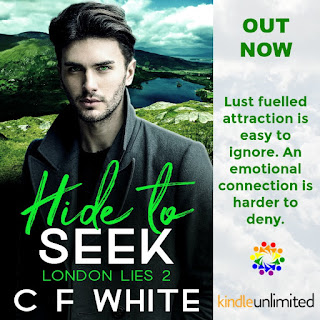 Posted by Gay Book Promotions at 06:30